British Dental Association (BDA) is the professional association and trade union for dentists and dental students in the UK, offering guidance and training to experienced and trainee dentists.

In 2013, BDA needed a platform to enable dentists and hygienists to carry out professional development activities and keep up to date with the latest industry news and training. They offered face-to-face and online events, but wanted to bring it all into one place to allow dentists to prove their competence to the General Dental Council.

They had two main requirements for their new LMS. Firstly, they needed to be able to deliver some straightforward courses very quickly, as they didn’t have a massive in-house development team. Secondly, participants’ activity needed to be recorded to prove what they were doing.

We had a number of educational elements scattered across various systems, which meant our members needed as many as six different sets of passwords and logins. Moreover, we needed to make the education accessible, since dentists have limited time to fulfill their continuing education hours and they don’t want to get delayed by a poor user design. A system that is hard to access won’t get used. – Stephen MacDonald, Head of Education Services with the BDA

We had been burned before by being tied to a proprietary vendor, which created challenges in terms of interoperability and customization limitations which ultimately impacted user-friendliness

We also wanted an accessible support community if we wanted to upgrade or fix something. When we looked at the Learning Management Systems on offer, Totara Learn, built off the Moodle LMS, fit our needs. Considering its widespread adoption by a large number of organsiations, we know this system won’t go obsolete overnight. – Stephen MacDonald, Head of Education Services with the BDA

BDA knew they wanted to use Totara Learn because of its massive global userbase. If they think of something they need, someone else has already thought of the same thing, meaning there are a lot of pre-made solutions in the community or in the pipeline. They looked at several Totara Partners to deliver this project, before eventually selecting Catalyst.

This is because Catalyst’s customer base comprises lots of work with other not-for-profit organisations, and BDA were in direct contact with their developers, who seemed genuinely interested in the project. 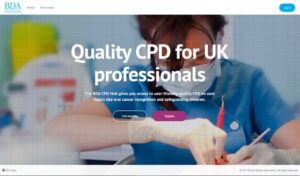 An important element of the project was some custom work involving an authentication system, using a central database to authenticate users as real dental professionals. BDA didn’t want anyone and everyone to sign up, meaning Catalyst built the system to require dentists to enter their registration numbers to access the platform.

As well as this, the platform also needed to be able to support a combination of free and paid-for content. There are around 12,000 BDA dentist members, who receive email marketing communications about the platform, and much of the platform’s traffic comes from word-of-mouth referrals from dentists to their colleagues.

Users tend to be attracted by the free content, then may decide to pay up to £600 via PayPal for extra courses, which needed to be built into the Totara Learn platform. 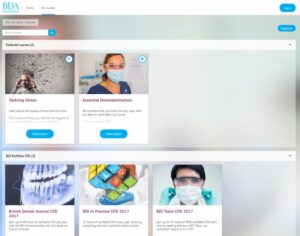 BDA also collaborates with other big names in the dental world, such as their courses for spotting mouth cancer in association with Cancer Research UK. Paid-for courses tend to focus on specialist areas such as x-rays, teaching skills and infection control, adding value to dental professionals.

BDA liked the fact that Totara Learn is open source, as it means they are not tied into a proprietary system where they pay for every minor development they may need. It also protects them against future decisions made by their vendor, and they benefit from the constant development of new features from both Totara and the wider community. 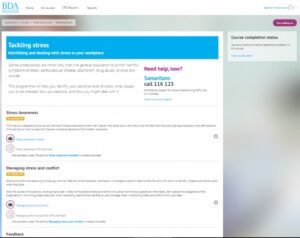 BDA is delighted with the Totara Learn platform created for them by Catalyst. They made around £600,000 in 2017 from their paid course content, which has proved a great revenue stream.

BDA has recognised a huge increase in this revenue stream over time, in part thanks to the automated course enrolment offered within Totara Learn, which has reduced the manual effort of enrolling learners and enabled more people to get started faster.

The automated enrolment process also means that the platform gains around 600 new users every month, all of whom can register themselves with no hand-holding or support required.

BDA believes that this is a whole new way for them to engage dental professionals, who are now approaching them for education. This is an entirely new channel to enable them to reach their audience, and they are now looking to add even more content to the platform to fuel further growth in the coming years.