The Science Museum Group (SMG) is one of the world’s greatest museums, comprising the Science Museum, London; National Railway Museum, York and Shildon; National Media Museum, Bradford and Museum of Science and Industry, Manchester. The Group employees around 1,100 employees and currently has over 800 volunteers to support over five million onsite visits each year.

Having previously used classroom-based training, SMG wanted to make a move towards online learning as its primary source of learning, shifting its L&D culture into the 21st century. Although having invested in face-to-face training, SMG required a platform that would help achieves its goals of higher employee engagement.

What’s more, with the number of employees and volunteers fluctuating depending on workload and season, SMG required an effective and efficient way of ensuring all workers have access to learning resources; something that would have previously taken significant admin hours.

After the tender was awarded to Learning Nexus, they suggested the Totara Learn as the platform that would enable the Group to reach their learning and development goals. SMG have celebrated scientific and technological developments throughout the year and have carried on the tradition as the new learning portal – ‘skillslab’ –  is an innovative approach to sharing knowledge and skills on a modern, open-source platform. 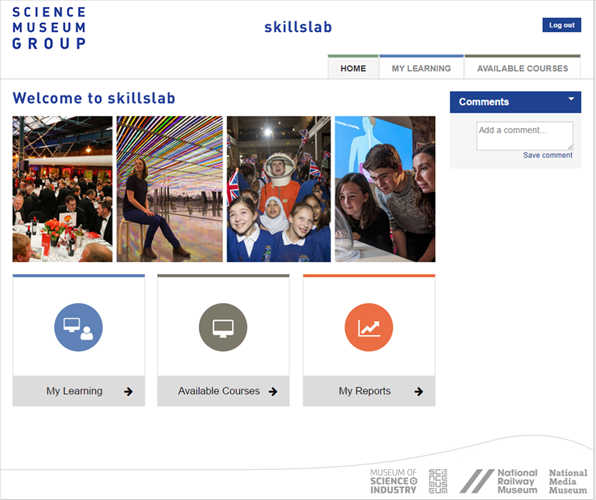 The new learning hub will operate across the group’s five museums, including the Science Museum and National Railway Museum, providing a strong sense of collaborative learning and helping to shift the Group’s L&D culture into the 21st Century. The ‘skillslab’ allows colleagues to gain access to the online portal at any time and the compliance element of the Totara Learn will allow for monitoring and reports at the click of a button.

SMG launched the portal with mandatory Health and Safety training and admin hours have already been reduced, with automated messages being sent to employees to inform them of courses to be completed. Features including automation single sign-on will help to streamline the learning process, removing the need for administrator input and creating efficiencies.

‘skillslab’, aptly named in a competition by SMG employees, is the start of a new culture shift in the way SMG delivers colleague training and development.

Judith McNicol, Director – People & Culture for SMG said: “We are very excited to launch ‘skillslab’, enabling increased learning opportunities for all colleagues at a time and place that works for them”.

Learning Nexus Account Director, Cath Mochan, said: “It’s been a pleasure to work with the enthusiastic and dedicated People & Culture team at SMG. They are clear in their aims and goals for this project and have embraced the technology and the benefits it can provide to them”.